First off, I have to say, that I am still using most of my class time getting them all to do the same thing at the same time. I am getting them ALL to do stuff on the board simultaneously, and then getting their observations, comparisons etc. This is a big change from my usual lecturing, but I know it is not the mastery learning model, wherein they pace themselves. I am reluctant to just let them work on their own at their own pace the whole time, because I can't see them. Until I come up with a way that I can do THAT online, that's how it's gonna be. Besides, they still have the rest of the class to do their "homework', which they are now referring to as "classwork".

But in the meantime, these classes are so much fun! We talk about so many little details that in the past maybe a small percentage of kids would have gotten, like today Raph asked "Is it possible to write the equation of a circle to make it look like an ellipse?" I've never had that question before, but I sure have shown examples like that in past years, with no idea if anyone got it or cared about it.

EVERYBODY watched the lesson this time, even one girl who was absent yesterday. I spent the lesson giving them plenty of brain and eboard exercise drawing angles - radians, degrees, positive, negative, big, small, you name it They had a workout like never before, and they ALL know what they're doing. J is unrecognizeable. I used to have to wait forever for him to respond to anything I asked, and he always claimed it was his computer. No computer problems this week, suddenly. Could this have happened without flipping? Probably, but I don't know how.
This class has been a real problem for me in the sense that they are SOOOOOO quiet. Very hard to get them to participate in any way, shape, or form. This week has been very different, though. Is it because of flipping? Well at least indirectly, yes, because I have had to come up with better class activities as a result of flipping. But they are so much keener than they have ever been, and it's because they get it! That HAS to be because they have the time to listen and re-listen.

Tonight they're watching this one:

All but one listened, and that was due to bad internet at home. In this class, there are 2 or 3 who have been the main participaters, but again, this week, everyone's hopping. Still hearing more from J, she is a real bonafide member of class now, drawing right along with the rest of them, with no prompting from me. Stunning me. Also had lots of opportunities to correct little mistakes around the class, and even get good at using the ellipse drawing tool, which reinforced the procedure for graphing.

Everyone listened to the lesson, and we even had time to investigate how to get conics showing up on the TI calculator without using the Conics app: 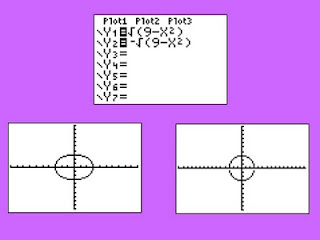 I have tried to fit this kind of thing in in the past, but this time it just happened. We even got to why does the circle look like an ellipse in standard zoom, but not in square zoom! I cannot honestly think of a downside to this. This really is amazing so far!

Tonight they are listening to this one:

On the topic of voicethreads:

I finally organized my students into their classes within the school voicethread site, and my voicethreads as well. It was getting a bit crowded on my voicethread homepage what with all these recorded lessons. Classes are called groups on voicethread, and once you have your kids in groups, it gives you another way to give your kids access to the voicethread you want them to watch. It's amazing how quickly I can learn how to do something when I am ready to learn. Have to keep that in mind for my students as well.

Nothing new here, except for the laTex editor. Will get back to getting a scribe poster, especially since now they can make it look so pretty.
Posted by Audrey McLaren at 12:37 PM