Another First in My 30th Year of Teaching

Welcome to the continuing saga of how I, in my 30th year of teaching, am doing things that I should have been doing for all these 30 years. Today's practice that I'm embarrassed to admit I'm only starting to do now is having students present to the class.  I'm not sure why I avoided it up till now, but I definitely know why I wanted to start very much this year. I was inspired by my colleague Peggy Drolet, whose classroom management skills I learn from every day. She and I both teach online, and so constantly have to work hard just to create a sense of community, establish our presence, and get the kids to do the same. A couple of weeks ago, she had her students do class presentations, with great success, and so I jumped on it. The presentations were, at least on the surface, about math, but I had lots of other ulterior motives - mostly social ones, as did Peggy.

We're studying optimization, so for a presentation topic, I chose the polygon of constraints. I always compare the pgoc to a sculpture, so I thought this might inspire some creativity. The constraints do the same thing as a sculptor's knife - they remove something so as to let the shape emerge little by little. I asked my students to design their own pgoc from their own constraints. The requirements for the pgoc were that:
The Medium:

Also inspired by Peggy, I had them create their presentations using Google Slides, so that I could watch them working live, and so that they could work outside of class time without having to actually be in the same place, which would have been impossible considering they're scattered all over the province of Quebec. I've had my students do activities using google slides before, but it was always something I had created, and they were to edit. Also, in the past they were able to access the slides without signing in, so I didn't know exactly who was in which document. This time it was all done through their GAFE accounts. No more anonymous bobcats or chupacabras.

I created a bunch of blank google slide documents, one for each team. I shared each doc according to who was on that team,via their emails. I had considered getting them to do this part themselves, which would have probably taken a whole day in and of itself, but I caved to save time. Plus, this way, since I was the owner, I also had immediate access to their slides, which I wanted because I want to be able to watch them work.

Day 1: Meeting in the Cloud

I described the project to the whole class, told them they had 3 days, then they just clicked on the links I'd shared via email, and boom, they were all in their respective presentation work spaces, with their team members, and I was sitting there waiting for them all. I had all of the files open at the same time on my screen, so I could just click one tab after another, and go from team to team to watch. This is what mission control, aka my screen, looked like: 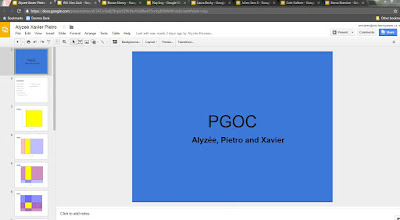 At the top you can see all the tabs, with the names of team members visible. The tabs are just the file names, which, since I created them, I chose a title that made my life easy.

If I clicked on any one of the tabs, here's what I'd see: 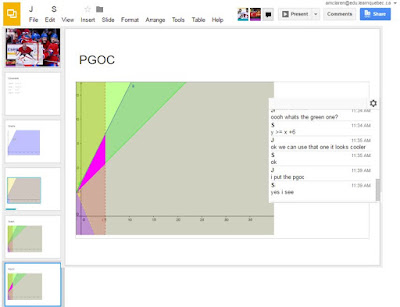 I could see who was in the doc, which slide they were currently looking at, their live edits, and the live chat. It was really fun to watch them creating their pgocs while they were chatting using Google's live chat tool, which is right there in the same window. It was such an eye-opener to see how much they enjoyed collaborating, socially and mathematically. I feel like I benefited from knowing this at least as much as they did experiencing it.

But it wasn't only there that things immediately felt different. There was more communicating happening everywhere. That first day: "Bye guys, have a great day!" to the whole class, from kids who'd NEVER said anything like that before. Kids who'd never tweeted suddenly started to. I definitely noticed a difference in the social atmosphere - in and out of class - right away.

The math:
So many other cools:
Presentations: The PGOCS

I'm just going to let the pics speak for themselves. (I know there's a way to get blogger to put images side by side, but I can't even right now.) 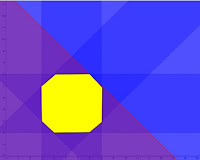 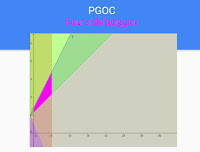 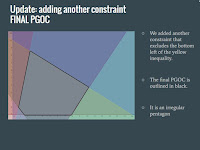 Such style, such pizzazz!

As for the actual live presentations? So much fun to watch - how they handled it, and how the others reacted. Voice is a huge presence for anyone who teaches or learns in an online class. So much personality is revealed in the tones of a person's voice. Not to mention the little touches some added, like getting the others to participate, and putting little jokes in their slides. Everybody got to know everybody else a bit better, which for me, was the whole point.

My only problem was that I tried to record them all and chop the video files into individual ones, and in doing so, inadvertently deleted some. I could definitely use a digital assistant. This seems to be happening a lot lately. Must also have something to do with being in my 30th year of teaching....