How to Get Organized in Your 30th Year of Teaching

Many years ago, as a young, disorganized, overwhelmed, but still enthusiastic teacher, I fantasized about opening up my plan book in September and having every lesson on every page already filled in. A stress-free year, in which I'd never have to wing it. I was so wrong about many things, not the least of which was that that would be a truly dull and cognitively dead classroom where nothing surprising or unexpected ever happened. But I was right about one thing - I did need to get organized, so that I could handle those surprises.

I tried a few things - colourful filing systems, getting advice from my mentors, just plain disciplining myself, with some small success, but everything seemed to require that I practically change my personality. Just stay up-to-date and keep everything neatly filed - it's as easy as that! It was meant to help but it didn't, not in any long term way.

Sometime around 2002, my school got Smart Boarded, to my great delight. And say what you will about Smart Boards, but they helped me get organized.  I didn't expect that to happen, and it didn't happen right away - it took a year from the time I started using one. During that first SB year, I wrote on that fancy board much the same way I'd written on the chalkboard, but the biggest difference was that I could save all of that writing by date, topic, whatever I chose. That meant that I began the next year already possessing a real timeline for each unit, not to mention a starting point for planning better lessons for this year. In one stroke, my organization and pedagogy were improved and I hadn't had to suddenly change anything I was already doing in order to achieve it. I used what I did, and built on it. I think that's the key to getting organized - be who you are, watch what you do, keep a record of what you do, & build on that.

This year, I used some of what I'd learned from the SB years, plus I intentionally made one very small but powerful change.

I didn't do it at the beginning of class, mind you, because that was always the reason I'd skipped it in the past, that it took away class time. So this year I did it right after class, while it was still fresh in my mind who'd been there. Unexpected bonus - if I couldn't remember whether or not a certain student had been there, that meant I hadn't interacted with that child. Not good, but good to know.

How did this become so powerful?

From the first day of this school year, I paid attention to myself. Every time I noticed myself doing something along the lines of management/routine/organization (corrections, time sheets, reading emails, etc), I jotted it down on a post it and stuck that within reaching distance of my chair. Very quickly I noticed categories emerging - things I did every day, once a week, end of a unit, so I transferred this info onto colour coded post-its: 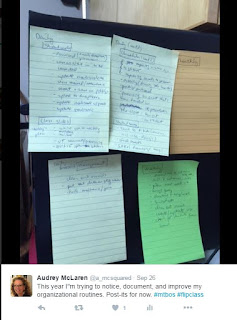 This took time - I was finding time to do something I'd never done before. Which meant that my own behaviour was changing, not because I or anyone else was forcing it, but as a natural consequence of simply watching myself.

These post-its started turning into checklists, like the ones the pilots in Sully used, that helped them stay calm and think clearly while the plane was headed for the Hudson river with 155 people on board. Nothing on the checklist directly changed the outcome, but indirectly it gave the pilots the mental energy they needed to focus on solving a problem.

And that's how I think my checklists, routines, and post-its are helping me this year.

I refer to the daily checklist once or twice a day. I've added things to it, and moved some onto the weekly.

Every Monday, and again every Friday afternoon, I go through my weekly checklist. I've added things to it, too, and moved some around.

These routines, which aren't static by the way,  make me feel stronger, less overwhelmed, and less stressed. They help me in the short term and in the long term. They're not the same as those endless to-do lists I used to make. These are much more long term, and their benefits keep on multiplying.

So is my life perfect now?

I can't honestly say I'm getting everything done exactly on time, but I can say that I know how far away I am from that goal. I can make the adjustments I need to on the fly, weigh the costs, and use written words and facts as a basis for my decisions rather than full-out panic.

I can say that I'm organizing my class time better - fitting in those wonderful WODB activities, even a couple of mini-contemplate-then calculates!

I can say that I'm more energetic, more likely to remember to deal with all those unexpected things, having new ideas more often, trying out more things, doing a much better job of rolling out GeoGebra (more about that in a future post) ...it just feels a heck of a lot better.

I can also honestly say that for the first time in my career, two months into the year, instead of feeling the ropes slipping away from me, and in spite of the fact that I've been sick since October 12, I feel, in my bones, that I'm still at the helm, and doing a good job of keeping us all moving ahead. Good AND good to know.
Posted by Audrey McLaren at 12:55 PM 2 comments: