There's knowing and then there's KNOWing

My students did this activity yesterday, in which they unwittingly drew a parabola using geometry instead of algebra. So they "knew" about the focus and directrix of a parabola, and that all the points on a parabola are the same distance from the focus as they are from the directrix. And they "knew" the formula c = 1/(4a).

But I had a sneaking feeling they didn't really KNOW, you know?

So today I showed them this: 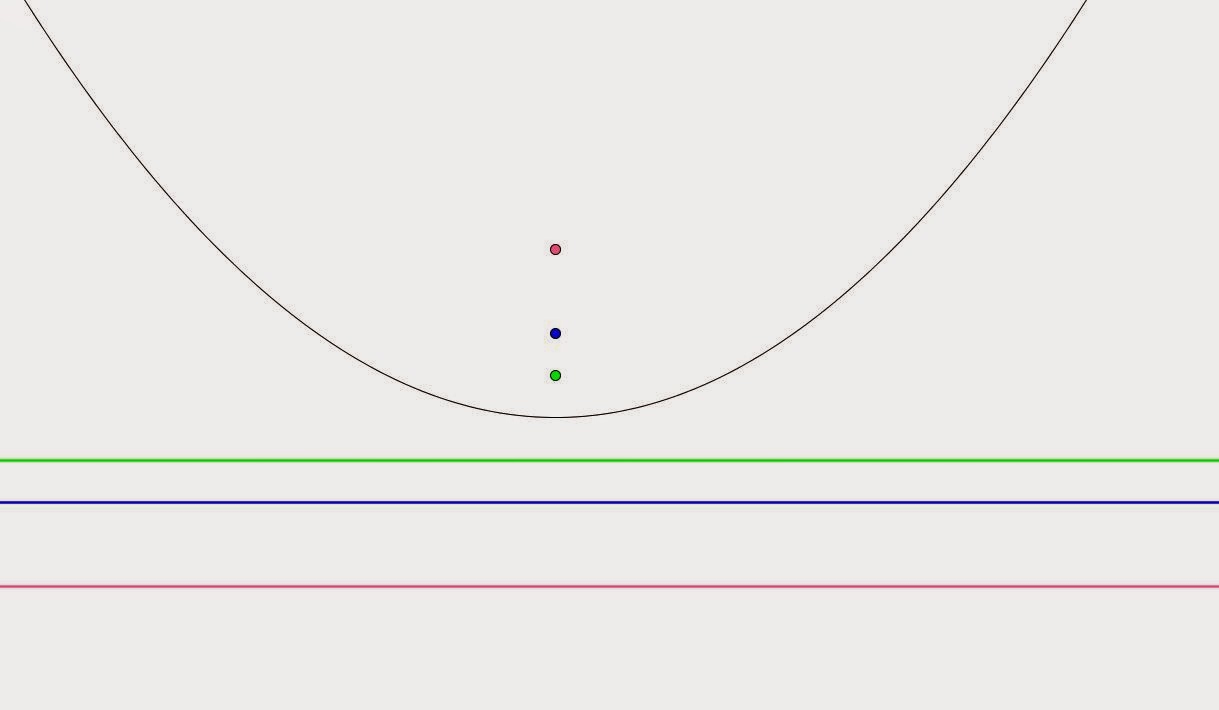 ...and asked "Which point is the focus of this parabola?" There were guesses for each of the colours. Some said they all could be the focus. Bingo. They know what it is but not what it isn't. That's not KNOWing.

"If the pink one is the focus, then which line has to be the directrix?"

Right. We've just established that as soon as you have a focus, you also have a directrix - they work as a team. That's a slightly bigger picture. Also I need to knock it off with the colour coding.

"Is it possible that any one of these could be the focus, as long as we pair it with the correct directrix?" Some said yes, some said no.

Time to test out their hypotheses. I had everyone make a dot somewhere on the parabola with their initials.

"Draw L1 and L2 for your point using the green focus/directrix." 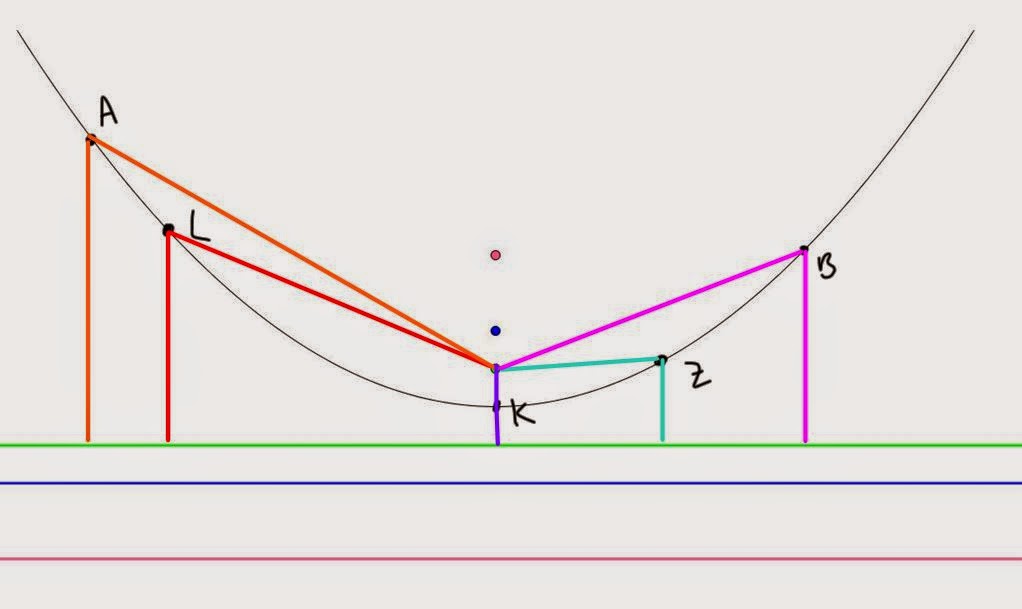 It was very fortunate that K picked the vertex for her point!

K's did, no one else's though.

"Well does that mean the green point is the focus or isn't the focus?"

Great discussion on why it isn't - it's not good enough to have one point on the parabola with L1 = L2, they ALL have to have it. They knew that yesterday, but this was knowing on a different level. I think the fact that each person "owned" a different point reinforces the all or nothing idea here.

Then each person picked a new points, and we tested out the blue pair. As soon as ONE person's point didn't work, the reaction was immediate - it can't be the right pair.

Now they knew that there is only ONE possible location for the focus and directrix of a parabola. Move anything and it doesn't have the L1 = L2 property.

We finally tested the pink pair and found it to be the actual focus and directrix. Now they knew where it was and where it wasn't, and there's only one possibility for the former.

Way to drop the ball McSquared:

The final point I wanted to make was the connection between what they just did and the formula c = 1/4a. Not the algebraic connection, but the bigger, deeper one:
The numbers are connected like this: Change the value of a, and you'll change the value of c, and vice versa.
The things are connected like this: Change the parabola, and you change the focus and vice versa.

Unfortunately, that part was just me talking, which I'll replace next time with them doing something, not sure what. Something involving matching parabolas with c values and focus/directrix pairs.....it was time to zoom out here and I dropped the ball, but I'll pick it up next year.

But I do think I helped them to KNOW, you know?
Posted by Audrey McLaren at 9:25 AM 6 comments:

Developing the standard rule of an ellipse

This activity was inspired by two people: Teresa Ryan, a fabulous math teacher tweep, and Amanda R., one of my students. A few days ago, Theresa tweeted this


Anyone have a good introductory lesson to the standard form of the equation of an ellipse? TIA #MTBoS #mathchat
— Teresa Ryan (@geometrywiz) May 7, 2014

and that question started the cogs turning. Around the same time, I had my students playing around with circles on desmos. Amanda happened to type in the equation 2x² + 2y² = 1, and notice that it had a smaller radius than our unit circle. That lead to a nice discussion as to why the radius was less than one, and then why it was equal to the square root of 1/2.

So today, again, all of this kind of gel-ed on my way into class. Here are my guiding questions, and their collective answers:

Open a desmos or ggb, and get the unit circle to show up.

Type in another equation like this, which = 1, but make an even smaller circle appear, and write your equation on the eboard, plus the approximate radius. 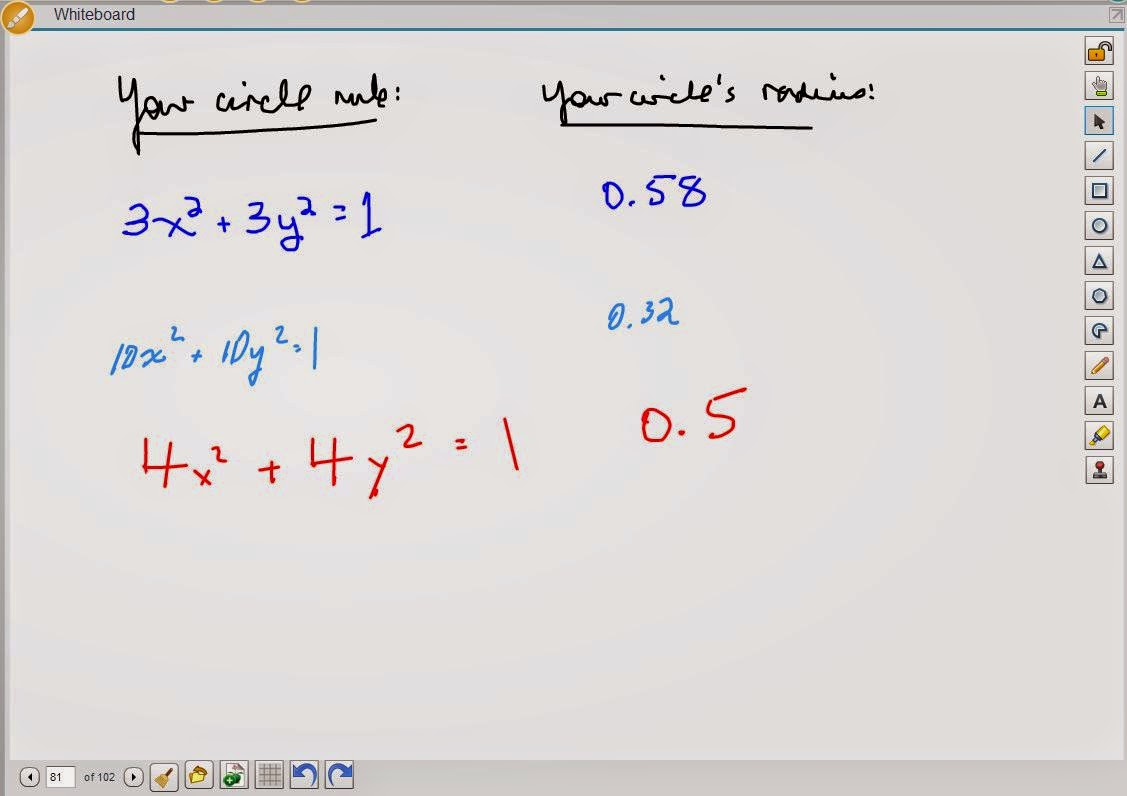 Find pattern: as coeffs get bigger, circle gets smaller.

Type those in, measure the approximate radius, and write on eboard: 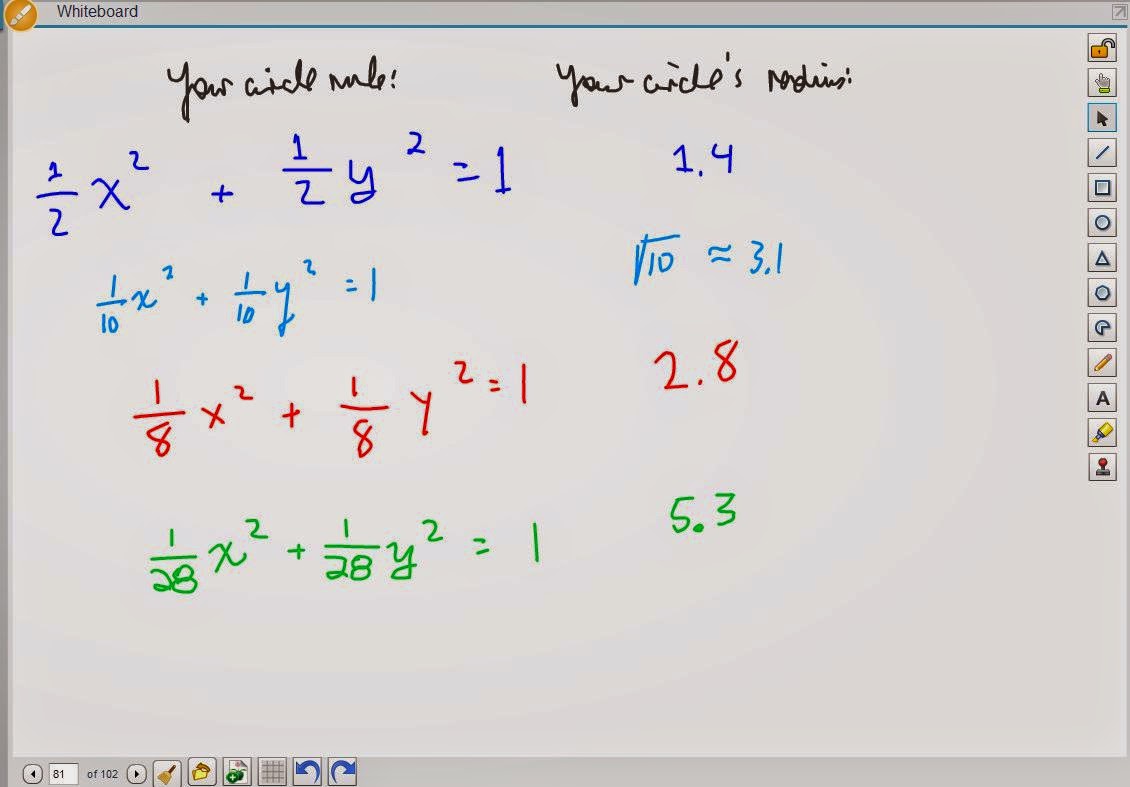 Is it okay if we write these equations this way instead? Are they equivalent? 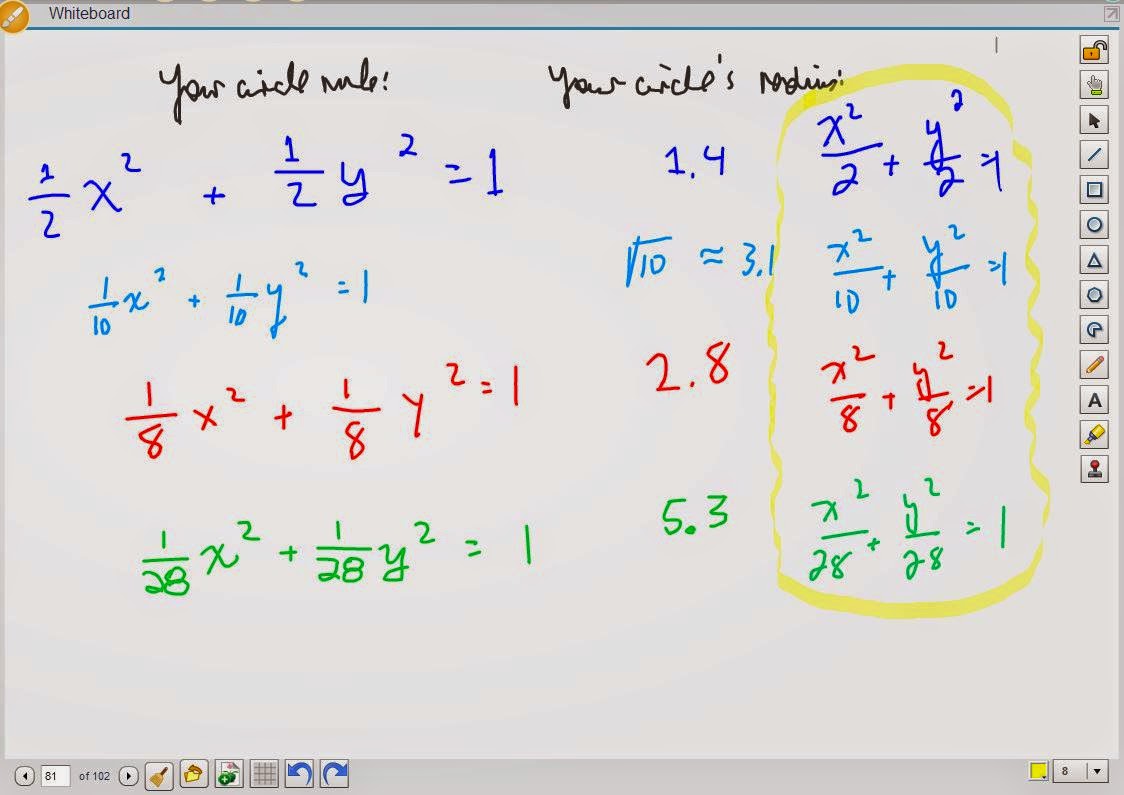 Now how can we calculate the radius from the rule? It's always the square root of the number in the denominator.

Which denominator? Well, it doesn't matter. Doh. They're the same.

Oh right. I didn't notice that. Well type one in that doesn't have the same number under each term, what do you get? An ellipse!

Tell me your equations and the dimensions of your ellipses:

Unfortunately I didn't take a snip of this, but the variety was wonderful, some ellipses were horizontal, some vertical, it was absolutely no big deal for them to see that the number under the x always governed the width and the one under the y governed the height, plus that a square rooting was involved.

From there it was a piece of cake to generalize to the standard form of the ellipse! We did a bit of practice where I gave them the rule and they graphed, and vice-versa. It felt like I'd covered 2-3 days' worth of concepts just today.

Thanks Teresa and Amanda!
Posted by Audrey McLaren at 9:47 AM 2 comments:

New Intro to Locus and Circles

All of this actually happened today, although, well, maybe not all during the same class. So it's piece-wise true...

This was the first day of our last chapter, conics. I wanted to begin with the idea of the locus of a point. But I didn't want to actually tell them what a locus is, I wanted to show them, then get them to tell me.


By the way, if you're interested, here's that geogebra. Next I asked my students what they thought a locus was. Here are a few samples, word for word:
Their words, not mine. Which, collectively, touched on all of the key points - that it's a path, that it's created by a point, that the point is moving, that as it moves, the point is following some kind of rule.

Part 2: The circle as a locus:

I then wove all of these locus ideas into this geogebra, made by the brilliant Jennifer Silverman:
How beautiful is this?

I let them play with it a bit, to draw a few circles, then identify which of these virtual things was the locus, which was the moving point P, and what rule that point was following as it moved. Here are their answers, again collectively:

What is the locus? The circle is the locus! (Just that right there was huge. All these years I've been the one saying that, and approximately no one was really seeing the circle any differently than they had always seen it - as a static thing.)

Which point traced this locus? The point at the tip of the pencil.

What rule did the point follow as it moved? It stayed the same distance from the red pin.

Then we formalized that into the locus definition of the circle, which for the first time since I've ever taught it, I didn't have to dictate or get them to fill in the blanks on pre-made notes. Okay, I did give them the word equidistant.

Part 3: The rule of the circle

Next I wanted to move onto the Cartesian coordinate system, so we reviewed that:
I gave them this desmos:  and had them work on that in groups. Just like when they're using geogebra, there is no need for me to tell them if they're right or not. If it is, they'll see a circle with the right radius. Again, there were no notes, no me telling them what the rule is. It took some trial and error, but eventually everyone noticed that the radius has to be squared in the rule. After a bit we regrouped, discussed, even a few things that I hadn't expected would come up:
On the way out, I had another idea. I need to write this down so I'll remember it all next year. That was 9 hours ago!
Posted by Audrey McLaren at 6:26 PM No comments: