Today is exactly one year since I posted my first deep thoughts on this blog. Now my blog archive has a link for 2011 and 2012 - cool! Might as well call it Audrey 2011 and Audrey 2012, because this year I have learned, wondered, and lived right here on McSquared.

Did I do what I wanted?

My original idea for this blog was more or less centered around online teaching, and by that I mean REALLY online - the virtual, live classroom in which I teach. But 99% of what I learned and blogged about applies to any classroom. So my goal is a subset of what I ended up doing. Check!

What did I learn?

The Big Picture: What I learned about me:

I am in charge of 30 young people who also need those things.

When I am writing a post that really gets me, it is all can think about until I am done.
When that happens, I don't know if three minutes or three hours have gone by.
But my kids sure do. (The biological ones, I mean.)

An awful lot of people out there think people who blog are egotists.
I would much rather change that than be hurt or complain about it. Even if it comes from friends and family members.

An awful lot of people out there are afraid of technology.

I am still one of them (btw posting about my new smartphone really, really soon).

I have never read so much, written so much, struggled so much, learned so much, or grown so much as I have in this last year. And all because I was free to pursue my interests.....I wonder what would happen if my students had that opportunity?

One year from now, who knows? I'll just keep doing what I'm doing, and like Dorey says:

I have been developing something over the years that I call The Big Picture. It started as a classroom activity, from way back when I was teaching in a brick-and-mortar class, so we're talking at least 5 years ago, probably more like 8. This is the first year that I have used it as an assignment, and it really seems to be....I don't know, becoming something.

Once we had done a few different functions, I would put this on my beloved smartboard (btw, miss you! love you!) 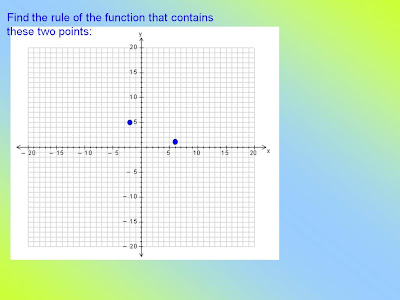 Usually, someone would assume I meant the function we had just done, but on a good day, another person would say "What type of function is it though?" and I would rejoice! Just that moment felt like a breakthrough - ooooooh it could be ANY function!

"Quadratic" I would say. Much unhappiness...ummm miss, we did that LAST year....hello, we're like 16 now.

Once I beat them into submission, we would get an equation that did indeed pass through the two points, like this: 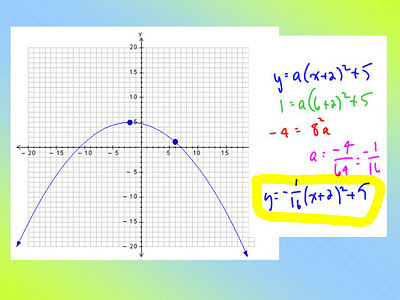 Looking at a bigger picture now:

Since my first career choice was acting....

I would then smack my forehead, and exclaim "Wait a minute! Did I say quadratic? Wow, you guys are like 16, whoah, sorry, my bad, I meant it was an absolute value function!" Knowingly rolling their eyes, they would tuck into that.

And a bigger picture would emerge:

Because now it was time to talk about a bunch of other stuff, like: compare your method for finding this rule with the quadratic? do you expect any of the parameters to be the same? which and why? are you making any assumptions this time?

After we had done the absolute value and all its possibilities, I did the head-smacking thing again, they rolled their eyes again, only to be shocked that now I was "realizing" I actually wanted a linear function that went through these same two points.

Blink. Miss. That's, like, insulting. Oblige me, I would say, and after a quick review of slope, etc: 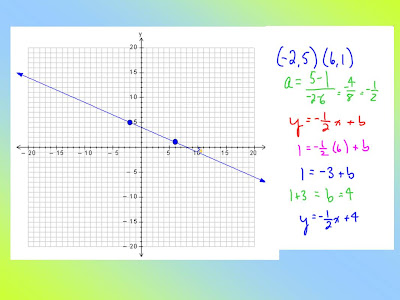 But then when I asked the same questions as before, like is there any other possibility, which is the vertex, compare methods, parameters, etc there was some wonderment. And on a great day, someone would notice that the slope matched part of the absolute value function....coincidence?

The big picture that day was:

When all went well, and I had enough of them hooked to reach critical mass, they could see that if there is enough information to DRAW only one function, that means there is enough information to find one and only one rule,and also that any time you are making assumptions about which function, which vertex, etc, your answer must include those assumptions. But I didn't want to say it! I wanted them to!

And that's it, right, no bigger pictures out there?

Well, that's the thing. From there, each year, I added more and more functions, and more and more questions, so that it evolved into something that got too big to do in one class, so I split it up into 2, then 3, so that I had a sort of cycle going, where after finishing a unit or 2, I would do a Big Picture class, and everyone got to know what that meant. But even that changed each year.

This year, with geogebra, it's all been ramped up about 20 pegs. Now they get to be the ones typing their rule into the input, and seeing if they get something that goes through the given points. Instant feedback of the most authentic kind. They also get to colour things in! Which is hugely motivating, as it turns out, not really surprising, as I love to make things look nice too.

So currently, it is an assignment that comes in two parts, the geogebra part, which they get here on geogebratube, and a list of exploration questions in this word document.

But I'm still the one asking all the questions, which is where I hope the next change will come from. Just because I love the connection between the drawing and the algebra doesn't mean they do. Already in some of their work, I have read things that I never thought of, which is absolutely thrilling. And humbling. And enlightening.

As soon as all parent permission forms are in, I will post some of their work, which was astonishing, to say the least!

Happy New Year, can't wait to see what we'll all be doing/sharing/thinking one year from now!
Posted by Audrey McLaren at 8:47 AM No comments: