Note to self for next year when you do dot product: You know how you've tried so many times to get the dot product to make sense to your students, and failed?

While waiting for kids to arrive:

I wrote <3, -4> on the board and asked all students, as they entered class, to write another vector that was orthogonal to it, but it had to be different to everyone else's. After the easy ones were done, ie <4, 3> and <-4, -3>, others had to go with ones that were collinear to one of those. This was to remind all that when 2 vectors are orthogonal, 3 things have to have happened between their components: a switch, exactly one sign change, and a multiplication by some scale factor (which can of course be 1). Also a good opener, bc kids who are early or on time got the chance to put the easy ones up, and those who arrived late were quickly able to catch on and jump in right away.

Now that everyone was there and warmed up:

All voted as to the truth of these statements: 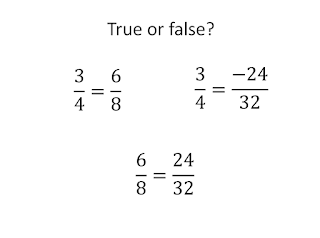 For 3/4 = 6/8 I asked: How do you know it's true?
-I punched 3/4 then 6/8 into my calculator
-Iimmediately recognized that num and denom had both been doubled

But only one student talked about cross product. This was an eye-opener to the rest. They are used to "cross-multiplying" to solve proportions but they didn't know where it came from...we tried that out on a few known true proportions.

Ok then I inserted negatives in various positions and did T or F each time? We agreed that only if there are an even number of negatives in total is it true.

Last eg we knew must be true because both are = 3/4, but we used cross product to check. Agreed that it was at least as fast as dividing twice 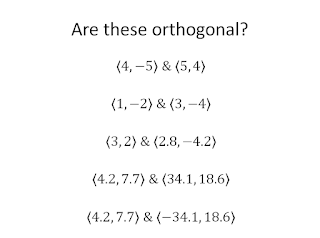 And I first asked in each case, are the signs a deal-breaker? Agreed that here we want to see a total nbr of negs that is odd, since that means exactly ONE sign change has happened.. First two egs easy to decide.

Reframing: And this is the part I've messed up all these years (Sorry students of my past.):

After last eg I reframed that process this way: 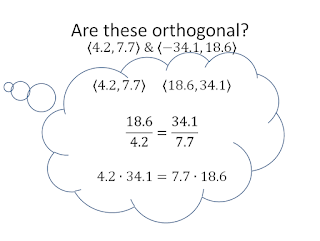 I asked do we really need to know how much 18.6/4.2 is, or is it enough to know what ELSE comes to the same thing? Then we used that "new" cross multiplication way of checking for proportionality to arrive at the last line.

Then asked them to compare the last line with the first, to detect where the 4.2 and the 34.1 came from. "They're the x components of the two vectors." And the 7.7 and the 18.6? "The y-components."
Emphasized that if the product of the x-components is equal to the product of the y components, we know that between the two vectors, a switch AND a scale factor multiplication have happened. 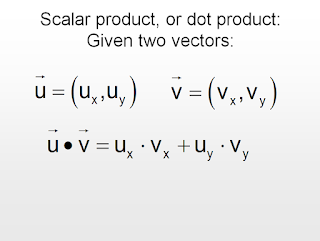 Took my time to highlight notation here - the dot, the subscripts, also that this involves multiplying the x components, and the y components, like we just did.

I went to a blank screen and wrote: If a + b = 0, then what do you know for sure about those two numbers?
Various answers:
-they're both 0
-they cancel each other out
-they're the same number but one is + and one is -

We agreed that they must be opposites (allows for both = 0)

Moved back to definition of dot product and wrote: 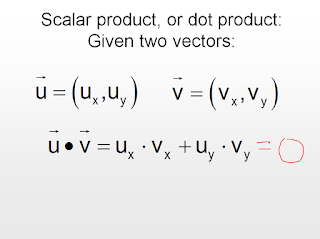 and asked - what must be true about uxvx and uyvy if they too add up to zero?
-they must be opposites.

So now we know that there's been a sign change, a switch, and a scale factor multiplication.

Used dot product to detect orthogonality or lack of it on a few more egs.

We also moved on to what it means when dp comes to a positive, and a negative, but the why of that not so much - next year maybe you'll figure that out, Future Audrey.