I'm a certified GeoGebraphile, and have been for years. All that time, I kept hearing about Desmos, and thinking - it's lovely but I can do so much more with GeoGebra. But now that Desmos has introduced its Activity Builder, I'm torn between two dynamic geometry thingies. Here's why:

First of all, that means "to transform into a Desmos activity using the Desmos activity builder", or at least that's what it seems to mean to Dan Meyer, so it might as well go into the new dictionary.

Dan was talking about paper worksheets getting desmosified, but I did it to a GeoGebra of mine. I've used this GeoGebra now for a good 3-4 years, and it's always been one of my favourites, perhaps for sentimental reasons. It was one of the first ones I made that I felt had an actual impact on my students' understanding of a concept. Rather, it intervened to correct a common mistake that many of them made. Never mind what the mistake was, the point is, for me to do this to this particular GeoGebra was kind of a big deal.


What used to happen

Typically, my students would open the applet, which would look like this, to them AND to me: 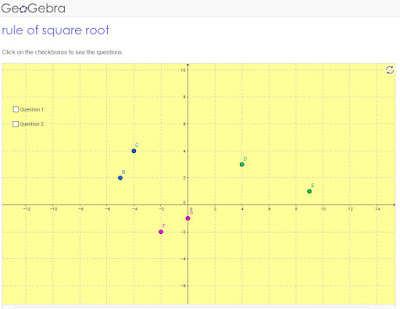 And they'd work on it on their own, or if they were so inclined, with someone sitting near them. But I could never see what they were doing at my end (I teach long distance). And if someone was stuck they'd ask, of course, but then there'd be kids who wouldn't ask, for the usual variety of reasons - too shy, no idea what to even ask, or something else had their attention. Then those who were so inclined would put their answers in, save it on their hard drive, then upload it to me on our LMS. I'd open it up, and it would look like this, to them AND to me:
: 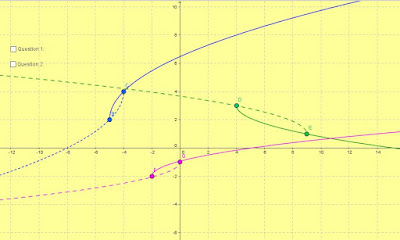 And I'd assign a mark, send it back, and go over it the next day, and I felt that they'd had a productive struggle that was well handled by the visual and interactive nature of the software.

But this week, at the last minute, when I desmosified it, it became all that and something else. The activity had all of the goodness it always had, plus it came ALIVE.

How do I show you how it looks? Not easily, because how it looks changes all the time! It's a shared experience in real time, not to mention that it doesn't even look the same to me as it does to them.

This is what my students see when they go to student.desmos.com and type in the class code I gave them:

(If you'd like to really see it through their eyes, go to student.desmos.com, and type in 9Y5F where it says class code.)

This first "slide" I made is very similar to the GeoGebra version.

One big difference in the live version though, is I knew the moment each student logged into the activity from my teacher view: 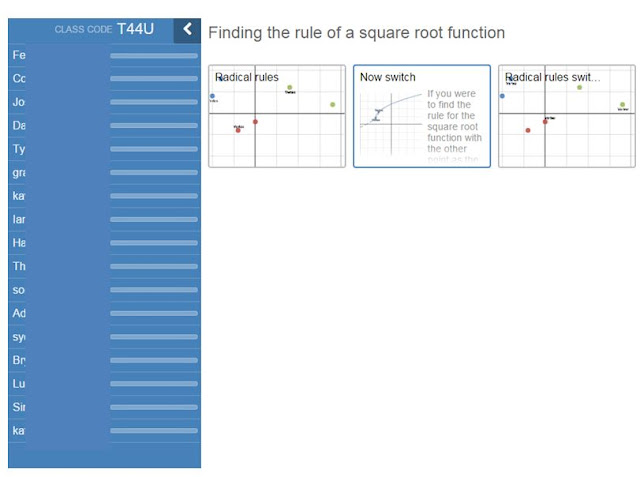 (If you'd like to really see it through my eyes, here's the link.)

On the left, I see their names as they enter. Once everyone's in, and working on slide 1, I can click on the first rectangle that's titled "Radical rules", and see this: 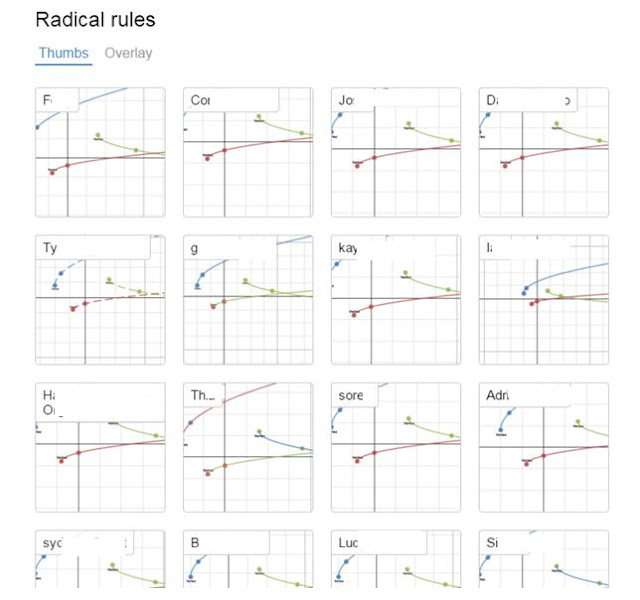 I can see what each student is doing LIVE in that first slide of the activity. What you see in this image is of course static, and the end result, but during the activity I sat and watched their graphs appear, disappear, adjust etc. I can also zoom in on one kid and see what they problem might be. I could tell when someone needed help, and offer it. I couldn't do that in the moment in the GeoGebra version.

Another huge difference, as you can see, is that there are 3 slides. Once they're done slide 1, they go to slide 2 and see this: 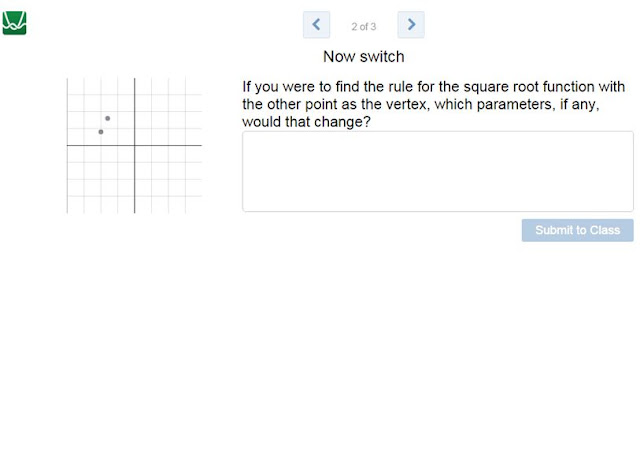 The real gold to be mined:

And I see, again, LIVE, their typed answers appear like this: 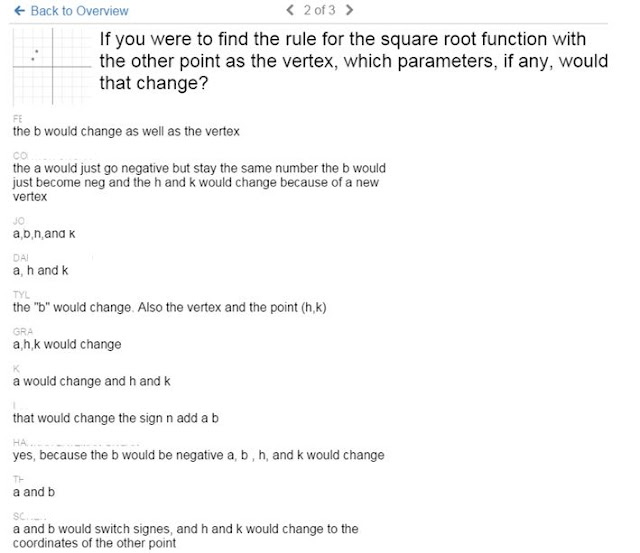 I can set it so that they can see each others' replies, so naturally I'd ask higher-order questions in that case. Or get them to.

So this isn't just a math activity to get the right answer, it's now a starting point for a discussion.

Or it's a place for them to reflect, focus, notice, wonder - to step back for a moment before moving on - together! Before we all move on for that matter! I need to know if they got the point too!

It's also a way to do on-the-spot formative assessment, because I can set it so that they can't see each others' answers.

And as the amazing people at Desmos keep working with the equally amazing #mtbos (and really there is no distinction between those entities) it will be more and more customizable, so it can become whatever you want it to be - but the LIVE part is the gold for me. I want classes in which I am surprised too!

So who do I love?

Does this mean it's over for me and GeoGebra? HELL NO! I'm still a geogebra-holic, but I'm finding that I'm using it differently now. It has features that aren't available (yet) in Desmos, or that would only be doable with an onerous cognitive load for students to handle AND learn math at the same time. Longer-term, more complex, and individual assignments like this.

In fact, I've also used Desmos activities sometimes to lead up to the major geogebras, as I wrote about here. I think the interface for desmos is less intimidating for most students. Its immediate response, the fact that there's no need to even hit enter, makes it friendlier for them.

So in summary, Desmos, and GeoGebra, I love you both.
Posted by Audrey McLaren at 7:14 PM 2 comments: 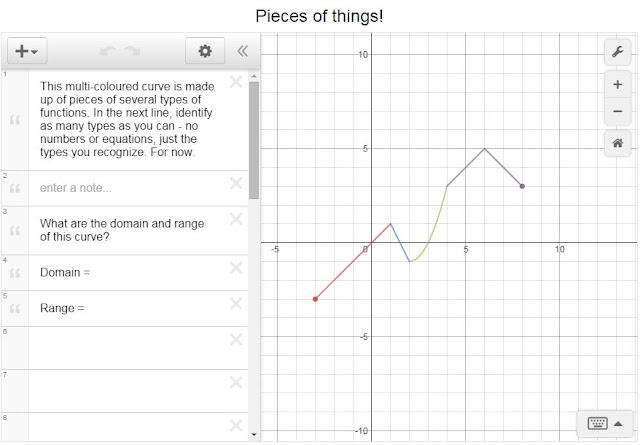 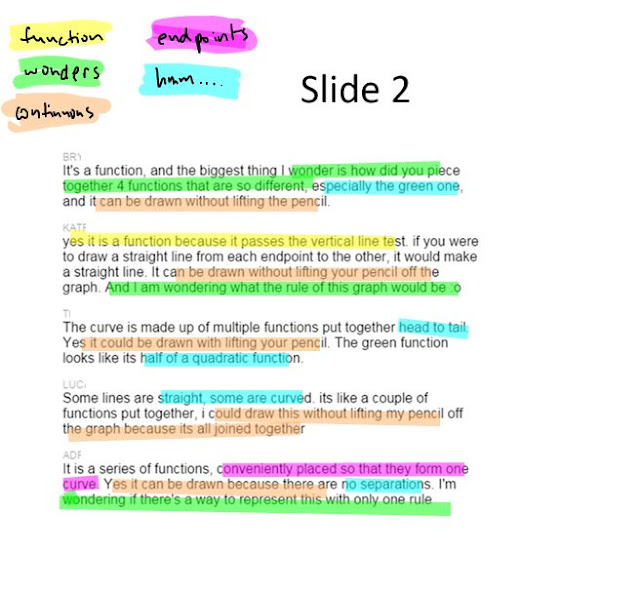 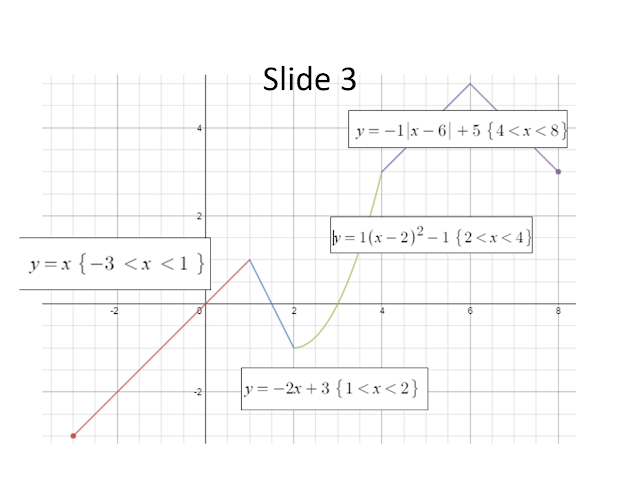 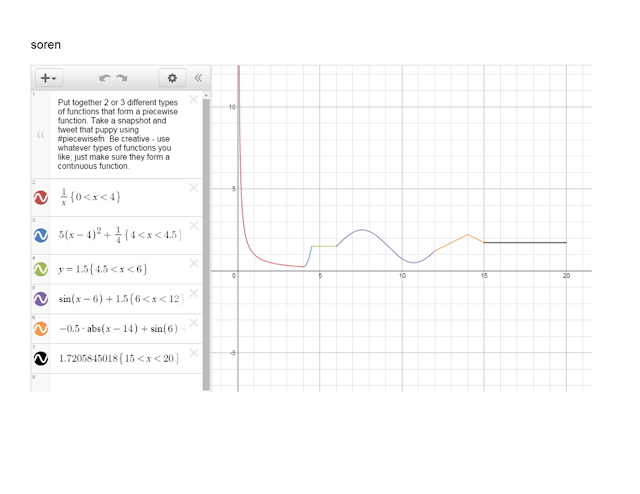 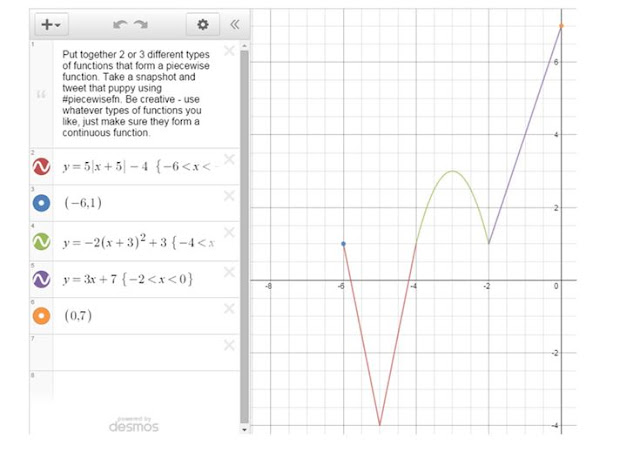 Posted by Audrey McLaren at 11:33 AM No comments: