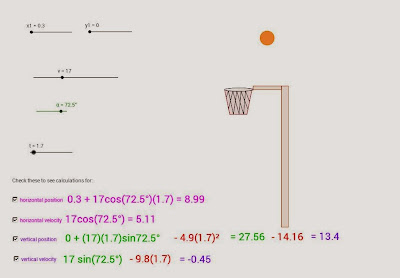 As usual, any other suggestions or feedback are hysterically welcome!
Posted by Audrey McLaren at 3:02 PM No comments:

Here are the projects! I and my fellow LearnQuebec teachers, Kerry Cule and Andy Ross, have just received these joint physics-math projects.

I am beside myself. Speechless, which doesn't happen a lot. Such variety - sports, nursery rhymes, video games, abstract art, pirate ships. And such creativity!

Each caption is a link that takes you to the html5 version at geogebratube.org. They all work, so have fun!


An embarrassment of riches:

Many questions and conversations arose in the course of this project. Some I plan to bring up to the whole class. And all came from the kids' own individual problems that they encountered along the way to trying to get their projectiles to fly. Some of these are ideas that I'm sure all physics teachers try to get across every time they do the unit, but I also think that some of these probably never would have even come up without this project as a backdrop. Riches beyond imagination!

"My formulas are right, but my projectile won't fly!" Launch velocity has a threshold: You need a certain velocity to overcome gravity - if the greatest velocity your slider allowed was 12, your projectile won't go up practically at all, because gravity overcomes it almost immediately: eg at 2 secs y = 12 (2) sin 50 - 4.9 (2)² = -1.2 m

Size of projectile: One student had a projectile whose diameter could be varied. Will that affect the path?

Value of g: One student had a slider for g. When would we need to vary the value of g? And should it be 9.8 m/sec² over the moon?

Dimensional analysis: What are the units of all the variables in the sliders? What must be the units along the axes?

Realistic values for variables - Why allow negative velocity, initial position, or time? Do they make any sense for your situation? Under what circumstances would those make sense?

Frame of reference - Not every student used the first quadrant as the location of their situation. Is that ok?

Angle - some allowed their angle to go up to 360°. Does that make any sense for this context? Under what circumstances would it make sense?

Other stuff: One student's projectile was an arrow, and one was a rocket. Super bonus: How to get them to move realistically along their flight pats? eg it begins with the tip pointing up and other end down, then they slowly reverse. Two different points joined by a segment? And what would be the difference between the coordinates of those two points? One has an angle that's the other one delayed, by a phase shift perhaps?

Next post will have student reflections about these projects - more riches. Any feedback would be hysterically appreciated, especially by these hard-working rocket scientists, literally!
Posted by Audrey McLaren at 1:47 PM No comments: