What to do with all that class time? It's been right under my nose all along.....

I remember when I first started flipping, I felt really uneasy during class, with all this face to face time.

For one thing, I missed seeing and hearing the kids' reactions to the lessons I had so lovingly prepared for them. No more laughing at my jokes. No more gasping when I, with great dramatic flair, revealed a stunning truth: 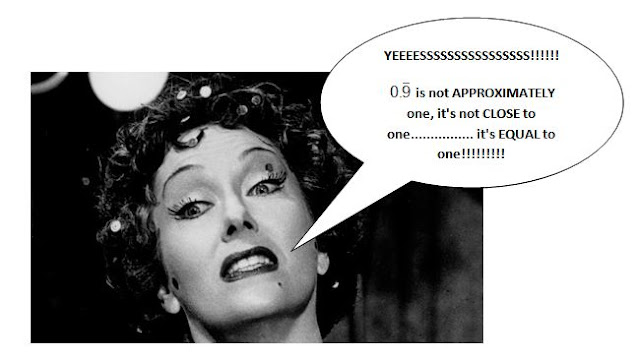 But it also felt not busy enough. I lived in fear that someone might walk into my room (virtually of course) and get the impression that nothing was happening. I also knew that there just might be some kids who were not working....shocking, I know. I blogged about that here.

So I immediately started to create class activities, which I felt would take care of both those issues. We interacted during the activity, I got to joke around, they laughed and gasped, and they were visibly busy and engaged. One of those I blogged about here.

But let's face it, I am only one woman, and inspiration doesn't happen when you most need it to, and eventually I started to wonder how useful the activity was to the people for whom it was designed....

So what's been right under my nose all along? Student reflection.

I've been getting all kinds of info from my students all year, from voicethreads, blogs, and googledocs forms to name a few, but I haven't really been looking at it all the right way. All of it is rich reflection not only of the individuals, but the class as a whole.

Now I realize, thanks to my PLN on twitter, that there is a very logical reason for getting students to reflect: It is the best possible inspiration for what to do with the f2f time. I finally understand the brilliance of letting them determine what happens. But don't get me wrong, I won't start each lesson with "So what shall we do today on our math adventure kids?" We all know what kind of response that usually gets. And the last thing I want is for them to know that I am giving them that kind of power!

Instead, I will let their reflections tell me what to do. Starting with their comments on the voicethreads.

Yesterday, I saw some questions about this trig identity example from the previous night's voicethread: 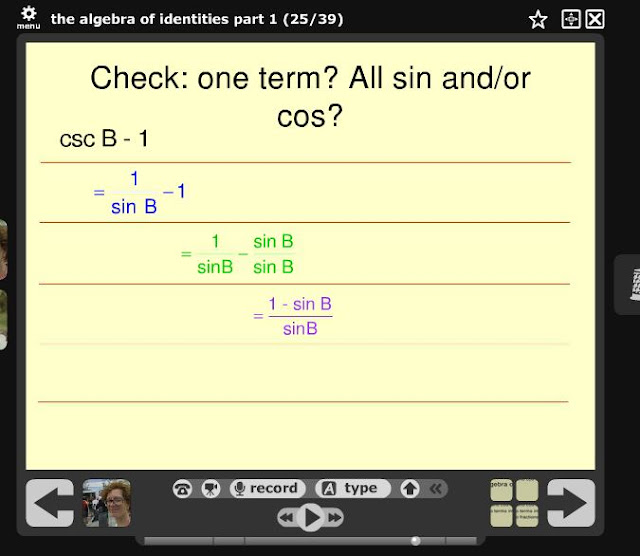 Both questions had to do with cancelling out the two purple sinß's, which of course, you can't do. Aha - that's where I'll start today, talking about when you can and can't cancel common factors, but not just with the two who asked about it, with everyone!

I put a trig expression on the board and polled them with a yes or no question: " To ccf or not to ccf?" (ccf is my abbreviation for cancel common factors....) And boy oh boy was it interesting to find out how many others needed to straighten out that particular detail. Even better, I let those who answered correctly explain, even decide how to explain, why you could or couldn't ccf. We did a few examples like this and that took about 15 mins. It occurs to me now that it had to have been timely not only for those who had already watched, but also those who hadn't. Cleared up some potential confusion hopefully.

Another vt comment lead to me polling them on who was feeling like this "Sure I can follow all the steps you're doing, miss, but I would never have known what to do next on my own." Talk about hitting the nail on the head - almost everyone said yes. Great relief all around! So we talked a bit about strategies, but here I have to admit, since it was such an overwhelming majority, I gave them my own tips. It felt like that was a time for me to reassure.

I guess that's what was missing up till now. All this info that's been coming at me from the voicethreads, the gdocs forms, the student blogs.....I've been treating it like static pieces of info rather than dynamic parts of the evolving story of our class. Seems so obvious now.
Posted by Audrey McLaren at 9:09 AM 8 comments: