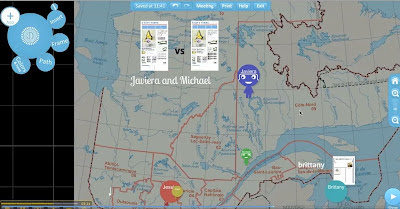 With this tool, we can see not only what was said, but also directionality, intensity, and who the movers and shakers were. It seems to me that this tool, and the twitter chat which it describes, makes it possible for us to process more information, more quickly, and in new ways. Maybe it even makes us superhuman? But then here's another irony - it certainly will take a super human to keep up with all the new tools that pop up everyday! Just when there are fewer and fewer phone booths around....
Posted by Audrey McLaren at 3:22 PM 4 comments:

So I gave them this geogebra worksheet, created by Evan Weinberg. They moved the segments around to form a triangle, then took a snapshot using their snipping tool. Then they went to this googledoc to insert their snapshot. I made it clear that under no circumstances were they to shrink or enlarge their image, I wanted the actual size. After we got just a few of them inserted, I moved my own triangle outline over theirs, sometimes flipping, sometimes rotating, and lo and behold, we all had the same triangle. So sss demonstrated without words, only by doing and comparing.

Next, they all logged onto their explorelearning accounts, and started the Proving Triangles Congruent gizmo. Did a quick demo of how to measure sides and angles, how to select the conditions, and how to play around with the triangles to see if they are definitely congruent, or not necessarily congruent under those conditions. Then they worked in pairs to fill in the slides of this powerpoint, using snapshots from the gizmo to back up their statements:

I haven't even looked yet at their dropboxes to see how they did, but I am already struck by how many tools they are now comfortable using! Geogebra, snipping tool, googledocs, explorelearning gizmos, powerpoint, uploading to the CMS.....I just spoke with some McGill students last Tuesday night about, among other things, all these cool tools I and my students use, and one of them asked me if the kids ever get overwhelmed by all of them. I said I didn't think so, because I hadn't heard any complaints. but after today, I am convinced they are fine! At least with the half a dozen or so we used today, because they seemed to just click right along, in fact, some had even started it BEFORE class!

We'll see how it goes, but one way or another, it turned out SO much better than I thought it would. Maybe I'm not crazy after all!
Posted by Audrey McLaren at 12:23 PM No comments: