I created and shared my first attempt at a CL diagram on twitter, and Jay Chow (thank heaven for Jay Chow y'all) replied:

Lines 1 and 2 👌🏽
Title for line 3 confuses me slightly. The format looks like you’re just creating a sink that requires an identifier (cell reference, function name, etc), but the title implies that we are creating both a variable in CL and a sink into the component. take to DM?
— Jay Chow (@mrchowmath) August 5, 2019

It turns out that it's not quite accurate to say that third example defines a variable. I had misinterpreted this example from the CL doc:

I had thought that the variable m was being defined in this line, but after checking out the "try it" I realized that m had been defined within the graph, so it wasn't accurate to say that it was defined right here.

So for now I'm sticking with the ones that I know are good: 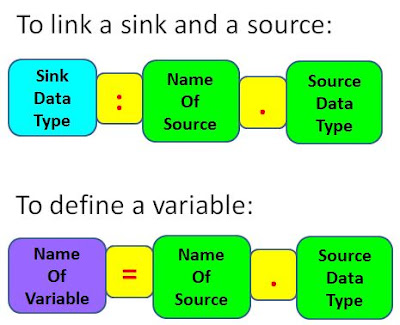 So now....I tried making up random CL things to see if they worked. Got something to work yay! I'm still not sure of when we need variables and when we don't but I think for now I'll just assume we always do and keep defining them. They need to be defined in the same place as the script that's referring to them. It's still in draft mode but here is where I'm playing around.

Posted by Audrey McLaren at 6:55 AM