Flipcon14 took place in Mars, Pennsylvania June 23-25, and I'm happy to say I was there. I had previously attended Flipcon12 in Chicago. My perception may be a little skewed, but it felt like this conference had a Big Idea feel to it that I don't remember from the Chicago one, maybe because I was still a relative beginner then. Where did this feeling come from?

First from the keynote speaker, Molly Schroeder. She said these three words:

That's what all these teachers have been doing with their own work, with other teachers' work, and it's what we want our kids to do.

Later, Brian Gervase said this, which I just had to tweet:


The flipped conferences have gone from being about technology to being about pedagogy @bdgervase #flipcon14
— Audrey McLaren (@a_mcsquared) June 25, 2014

Throughout the conference, I found that even though most of the sessions I attended were not specific to math, what I heard was nevertheless applicable to any subject. Big concrete ideas that are making their way through the Think - Make - Improve cycle, taking on new colours as they move into different subject areas, then branching out further, in a sort of learning fractal.

A rundown of what went down, and my takeaways:

Creativity: Biggest takeaway for me was that routine is a significant factor to creativity. Counter intuitive for me! I always thought it happens when it happens, you can't schedule it. Blogging, for example - whenever I've heard people say they stick to a blogging schedule, I've thought, well not me, I wait to be inspired. But it turns out there is evidence that routine really does help people be more creative.

Gradual release of responsibility: The year begins with bootcamp, and ends with work for which the student assumes full responsibility. During bootcamp, the essential skills are covered, like how to watch a video, how to talk to peers, how to take notes. For math class, it will be about those exact same things, plus using Geogebra and Desmos.

Opportunities to practice: no grades for these, simply practice on the essential skills but building in variety, such as taking notes from a variety of media, video, text, or a website. Perfect for what I'm planning for next year - giving my students more geogebra and less direct instruction, so they'll need to take notes from their own explorations with geogebra.

Grammarly: Cheryl showed how she uses this tool with her students. She feeds the students' text to grammarly, which it then scans it for grammatical or spelling errors, then it reports how many errors there are. It's up to the kids to find them and fix them! I'm going to do the same with math examples, maybe even create a geogebra with mistakes in it, and have them find and fix them. I can train them to use geogebra at the same time, kill two birds with one stone if you will.

Networking by subject
This was a great idea - one entire slot of time devoted to informal chatting amongst people who teach the same subject. Of course, I headed to one of the math rooms. We organized ourselves into groups by level, and I ended up in a circle of about 10 people who teach senior high. We had a great time just sharing our questions, ideas, general thoughts. There was a teacher there who had come all the way from China (if I recall correctly)!

This was just the right amount of subject-specific stuff for me. And even this discussion yielded some generalizations - via Steve Kelly, for example, about how kids organize themselves into groups according to their ability, which usually turns out to be about 4 different levels.

Soon after this, I started to feel overwhelmed, even though it was still day 1. I expressed this to Steve Kelly, who was kind enough to tweet it out:

Session B: Book panel:
Next it was time for all the coauthors of this wonderful book: 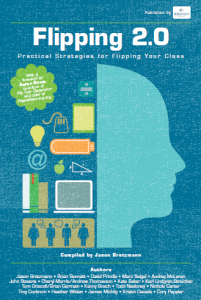 to join Jason Bretzmann, our publisher and tireless supporter, for the panel discussion he organized. Jason gave a wonderful presentation about the book, and had some questions for us all to take turns answering. It was an honour to be included in this group of talented people.


That evening we were all bused to the beautiful Carnegie Science Center in downtown Pittsburgh. I have to say, I had no idea that Pittsburgh was such a beautiful city! Our view from the science centre cafeteria was stunning - we were sitting in a valley, where two rivers become one, surrounded by an astonishing amount of greenery. Lots of huge yellow bridges, too! We had a great time eating, learning, and DANCING. Michelle Karpovich said it best: 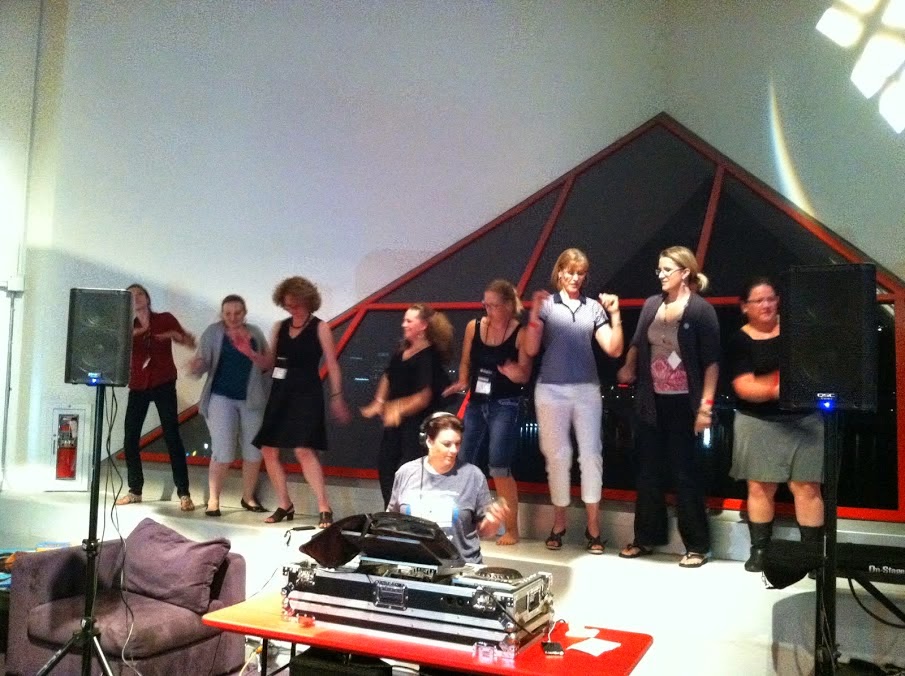 Day 2: Session C: Jonathan Thomas-Palmer
Videos: Jonathan makes physics videos full-time, so he's pretty good at it. He used to teach, and flip his class using videos, but found too many students did not watch them, so decided to make them so good that they would WANT to watch them. He gave us tips on making engaging videos.

Audio is of prime importance, get a really good mic, check your audio level, don't film outside
Talking head should be doing more than just talking - pick up stuff, point to parts of presentation, anything to vary. Don't film with light behind you.
Frequent visual changes ie text popping up that paraphrases what speaker has just said, arrows, callouts

Jon cautioned against trying to make something like this, with one person playing multiple characters:

....unless you have a professional grade software. Darn. That looks really fun.

Session D: Brian Gervase
This was one of those sessions that got me so worked up that I didn't take any notes. I spent this session either tweeting what I was hearing Brian say or just picking my jaw up from the floor, being stunned that someone else could speak my thoughts so eloquently and passionately. Brian's session was called Flipped Assessments. He uses mastery with his classes. Here are some of the tweets I managed to make, apart from the one at the top of this post:


These LMS 's are the teaching assistant you never had @bdgervase #flipcon14
— Audrey McLaren (@a_mcsquared) June 25, 2014


Problem we all have is trying to cram old curriculum into new pedagogy @bdgervase #flipcon14
— Audrey McLaren (@a_mcsquared) June 25, 2014

Anyone who knows me at all knows what my favourite math edtech tool is, and at one point during the session I became afraid I might lose what little professional composure I still had:

As it turned out, Brian ran out of time in his session, which is probably for the best, because he later replied:


@a_mcsquared @geogebra if I had ten more minutes you would get your geogebra!
— Brian Gervase (@bdgervase) June 25, 2014

Session E: Crystal Kirch
Crystal explained her WSQ system, which she uses in her math class.  I had read about it, and had even tried a form of it before, but it's always way better to hear things explained f2f and see it for yourself. Crystal's talk, like all of her writing, isn't just about the details of what and how she does the WSQ, or the TWIRL, it's much deeper and further-reaching. Brian said it best:


@crystalkirch has a ton of acronyms, but they're rooted in sound pedagogy and education theory. #flipcon14
— Brian E. Bennett (@bennettscience) June 25, 2014

Crystal also spoke of routine in her class, just as Andrew and Cheryl did. Bigger ideas included Organization, Accountability, Processing, Feedback, and Discussion, all features of her classroom, which we can all use, regardless of what we teach.

Session F: Stacy Lovdahl and Eric Marcos
Stacy gets her students to create videos as projects, and Eric's students create videos to help their peers' understanding. In either case, the underlying idea is purpose. Kids learn best when they're making something that they see the purpose of. Think - Make- Improve must be happening constantly when kids make videos. There are other benefits, though, such as kid-friendly language, both in the video and in the feedback other kids can then give:


One example of the benefits of student-created videos was Stacy's - you get 16 kids to each create a video showing an example of a chemical change, and boom, not only did they engage in their learning, have a purpose, but they also now have 16 examples! My favourite rationale for kids to present their learning this way instead of in front of the class is here:


When a kid does a presentation in class the other kids are just there to make them nervous @braveneutrino #flipcon14
— Audrey McLaren (@a_mcsquared) June 25, 2014

There is so much variety in what teachers who "flip" are doing, that the word really doesn't mean anything anymore. But I will still use it because:


#flipclass has come to simply be the name of a community to which I belong. It's no longer about what or how, it's about who.
— Audrey McLaren (@a_mcsquared) June 28, 2014

Posted by Audrey McLaren at 8:59 AM