My kids are about to submit their second geogebra assignments, which are on the square root function, but I haven't even gotten around to writing about their first ones, which were on the linear function, so here goes:

This was the assignment, and here are a few final versions, with only student initials as identifiers: 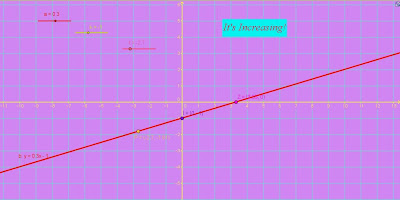 As you can see there are variations in the presentation. Some use colours, some use text to guide the person using the ggb. Even with the same set of instructions, there was room in this assignment for individuality - and the animated one was just spectacular, especially to watch a quadratic function slowly forming from the trace of the linear one! I'm sure there's something cool to be done with that....later.

I gave a lot of opportunities for bonus points, the most time-demanding of which was to do the entire assignment again for a totally different function, either the quadratic the absolute value. About a third of my kids did it! Here are a few of those:

You're looking at the final versions, but equally fascinating and exciting to see were the various incarnations of each student's work as it evolved, as well as their reflections along the way. This was possible due to the digital portfolio tool I'm using, called Epearl.

Reflections:
Here are a few reflections (I know, there's a lot, believe me this is just a tiny fraction) - word for word, including spelling mistakes. I've highlighted things I found particularly interesting. Also, know that I'm not only showing the positives, although the overwhelming majority were. And a change in colour means a different student's voice.

I am hardly motivated at all to do this assignment; geogabra does not help me learn and only confuses me.

"The Absolute Value Function" is uploaded!!! It's amazing how perseverance pays off!!! After hours, literally, of trying how to make the zeroes and the initial value show up proprely on my absolute value function it works. The feeling you get after it finally works is unbelievable. The excitement to see it work proprely is amazing.

Overall, I enjoyed the assignment. It had its ups and downs, but in the end, it got done. I liked working with it because it wasn't too difficult and gave me a better vision when working with functions (oh, Geogebra). Projects like these are a great learning experience while also giving students creative control, which makes learning easier.

I have to admit, Geogebra is pretty cool....

I don't think it's helping me much with understanding this, as i already don't really understand much of what to do ......i haven't figured out how to add the t into the equation to have it move along my linear line....Figuring this whole thing out is pretty frustrating because i'm not sure how to add the t into the equation and how to make it move...Well now that i sort of figured out how to use the sliders, they work! and the whole project id sort of coming together. ...I did have troubles with this project... Learning to user geogebra to do this was frustrating me a lot. But i did learn from this.

Today i finally figured out what the y-intercept was! Its very simple after you realise what it really is, simply the k! i figured it out by accidentally putting in the formula (0,-k) and realized that was a reflection of the actual y-intercept and realised it will have to be (0,k). Feeling progressive! :)...

Throughout the whole process of making this geogebra I was able to get better at using the sliders. This was demanding work, but once you know what to do its easy!

I messed around with things and added animations to them and I got point P to leave a trace (: I'm happy to have figured out these things on my own....I'm finaly done, with 10 minutes untill the due date lol.

I am not really a person that is good in technology but I was proud of me when I was able to complete this assignment . This is probably not the prettiest/ funnest/ coolest geogebra in the world but I still like it because it made me discover a little bit of technology but also I learned a lot on the math involved. Looking at my function change direction while I was playing with the sliders made me see a whole new image of how this function is working. I may not really be good with geogebras but actually working with this program is a big help me understand better the math I am learning.

i am happy with myself for not slacking off as much as i usually would, i admit i was lazy
by not doing the last thing in the bonus section, but i am still impressed with my performance.

I learned a few things about geogebra throughout this assignment at first i was only doing the geogebra for one function but then with help from you i put in the general rule and from there if i had any problems i just looked at the geogebra file in sakai on important points of an absolute value function.  It was a great project and i am excited to learn more about geogebra because it can help so much.

In my 3rd geogebra you can see that I animated both my a and k slider. I really love
that it changes it and can show how it changes by itself. I'm pretty sure it would look really
cool to show how something changes over time. The speed was at 1 at the begenning.
I found that to fast so I changed it to 0.1. I went to obeject properties for that specific
slider, went to the option slider and changed the speed (Refer to the screen shot's I
attached below).

I figured out so far how to make the colour of the line change depending if the slope (a)
is either positive, negative, or equals 0. When I had finally gotten it right I was so happy
I screamed. I think I might of scared my mom.

I'm almost done. Yay! I only have the little details left. Making everything pretty!

Wow. That's what I have to say. It's a lot of work, but a lot of fun. Challenging.
It makes your brain work to figure everything out and that's great. I have always
loved anything that put my brain to work, even if that meant that I got really
fustrated. In the end though it's worth it.

It basically came down to the fact that I was sattisfied with my work personnally
and just felt that I had tripled checke deverything enough times. I felt peaceful. I'm
not even joking. It was like everything was perfect.

When I would finish part of the activity I would be happy it worked, this made the
activity extremely satisfying and even fun. Sometimes just stepping away from my
computer and coming back would help me see my problem and then I would be

able to solve it without too much difficulty.

This was amazing. I feel like I now know a lot more about geogebra. It's a great way of

learning. I didn't think that it would be a style of learning that I would like, but I loved it.
Even though the goal was to make a linear function with many things, I learned so much
about geogabra while I was doing my assignment. I hope that we get to do something like this
again. It's fun, challenging, and creative. Emphesis on creative. Anything that is creative

I will fall in love with. I thought I was more orriented towards drawing on paper and things
like that, but being creative technology wise (using a program like geogebra) is absolutely
amazing. I didn't only learn about math and geogebra I also weirdly learned about myself
as I stated above.The universe has weird way's to teach us things about ourselves.

This was absolutly AMAZING!


Nuts and bolts:
What I wonder:
On to the square root function geogebras, due tomorrow! Some were already in yesterday!
Posted by Audrey McLaren at 1:05 PM