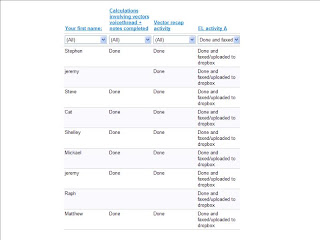 Interesting things: Flipping
And I just found, through the flipping teachers ning, that you can also use googledocs to make up quizzes that immediately tell the student if they're right and then sends the teacher the results for the whole class. Why would google do that? Why are you so good to me google?
Posted by Audrey McLaren at 9:53 AM