First: Inspired by Dan Meyer's webinar yesterday to begin each class with something interesting, showed this today:

Rich discussion followed, as you can imagine. What's in quotations came from them, otherwise I asked and got them to jump in (who's shutting up? I am!)

2. Another fun activity today, one I have used many times, came from the National Library of Virtual Manipulatives, an absolutely awesome resource: 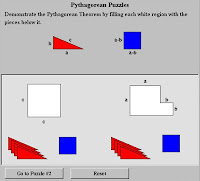 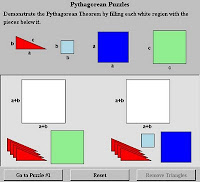 They manipulated the coloured shapes right on their screen so that they fit perfectly into the two white shapes...you get the idea, it's about proving Pythagoras, something they never cared about before! Even more fun was when they learned what the "print screen" button on their keyboards was for! "OMG it's a picture of MY screen!" They then sent their solutions to me. I had 100% participation. Okay, in one class there was only one kid...still true!

Tonight we're gonna blog, blog, bla-bla-bla-blog! (to be sung to the tune of that Ke$ha song)

Awesome posts and awesome comments from this week:

From Matthew: His question was just amazing, and funny, pretty much just like himself:

From Amelia: Check out the exquisite use of language:


Today in class we continued going over and exploring yesterday’s notes. We began with going over how to find the two sets of zeroes by using your calculator. You must punch the equation into the calculator and than use the “calc” -> “zeroes” button to manually place the cursor on the left than right side of the zero. Once you have found the first zero (we typically call that the heart zero) we form an equation to be able to find any other zero that is a period away. We must remember that there could be two sets of zeroes due to the l.o.o being above or bellow y=0. This is because if the l.o.o is above or below y=0 than the function on the graph will have two sets of zeroes that are separated by the period, but the sets will be of different but recurring distances from one another.

Today in math class miss Mc Goldrick showed us a way to find the zeroes of equations by algebra and memory. Pushing our math skills even further.
-first of all we started with a simple trig eq. we started off with cos(theta)=-1. Then we had to find which of this angle correspondes to -1. to do so you have to remember the unit circle and find which of the angles has an x coordinate of -1. As it turns out the answer is pi. but not only pi we also have to include all the coterminals.
(theta)=pi,3pi,5pi,7pi… or (theta)=-pi,-3pi,-5pi…
The way to write this as to include all the possible answers is
x=pi+or-(2pi)n,nEN
Simple huh


Today I wasn’t in class, so watching the archive and RIGHT AWAY reading the blog post is a great way for me to catch up! I see both points of view in a matter of one hour.
I’m really relieved not to have to rely on Jeremy’s calculator anymore to find zeros, although I’m having a bit of an issue remembering the angles in the B17, and same for the coordinates that go with it. This might actually be a good thing because it’s going to force me to remember them!

This job rocks. Days like this, I honestly can't believe they pay me to do this.
Posted by Audrey McLaren at 11:32 AM