I finally understand the ending to The Wizard of Oz! 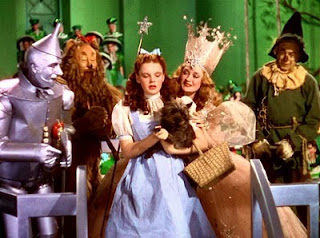 Huge tech breakthrough for me yesterday with the Operations on Vectors activity (see embedded doc from Mar 13 post). Totally solved the problem with the different versions of Word that everyone had, AND also addressed my desire to see them doing what they're doing, AND explained the ending to the movie that defines my life!

I "shared" my own version of the vectors document with my students during our class, which in Wimba means that I made the vectors doc that was displayed on my screen to be displayed on all of their screens. They could then see my cursor moving around, grabbing the vector arrows, drawing the resultant with the arrow tool, etc - they could watch me demo how to do what I wanted them to do AS I WAS DOING IT!

But that wasn't the breakthrough. That came when I gave them cursor control. They could then each take turns moving the arrows around, drawing the resultant, changing colours, etc while the rest of us watched! So no more worries about which version of Word they had - we're all looking at mine! AND, more importantly, I, and all of us, can watch them doing what they're doing while they're doing it!

The thing is, I had always, on some level, known that Wimba had that cursor control feature. I just never used it. Why not? I suppose I hadn't connected the dots. As I said, I'm not in my twenties anymore. But I also hadn't created anything like this Word doc that was meant for them to edit, as opposed to just print out, write on, and fax to me. Not only have I now connected the dots, I have first created the dots! Actually, the docs!

So now I am going to see what happens when I use this feature with other software, like TI Smartview, Smart Notebook, Geogebra...things that I have on my computer but they don't, but that I now can use in class with them.

And now for the The Wizard of Oz. Glenda tells Dorothy that she had had the power to go home all along. The Scarecrow demands to know why Glenda didn't tell Dorothy that, and she responds, "Because she wouldn't have believed it!" I never got that until now. Someone DID tell me that I could share and give cursor control, but I didn't see how I could use it until now. My mind was so focussed on other stuff, I couldn't have absorbed the info in order to see how to use it. Maybe that was Dorothy's problem too. She was just distracted!