1/4 listened to the voicethread. C didn't have time, M didn't have internet at home, and R didn't know she had to do that. But the good news, in fact great news, is that the one kid who did listen, is the last one I would have expected to! J always has an excuse for not handing things in, not doing homework...etc. So yay on that! He said he found it easy and he and his dad watched it together and figured it out. Sniff. Weeping.

So, change of plans, instead of giving them the work to do in class, I did the first half of the lesson (important angles in the unit circle) in class. I offered J the option to instead do the assigned work so that he doesn't have to listen again. He chose to listen again. NOTE TO SELF: Must ask him if he found that listening the second time was at all helpful - did he notice anything that he didn't the first time around! Or understand anything better the 2nd time around?

After getting through all the angles in degrees, I stopped teaching and had them fill in the angles from memory, individually, in breakout rooms. Interesting to watch them work. Some did them in ascending order, some by first doing the quadrantals, then the 45's, etc. Having this opportunity to watch them doing something was great for me, and it was great for them to organize all this info in a way that makes sense for them. I watched as J made a mistake, then self-corrected. Dried my eyes and moved on.

Now they have to listen to the rest of that lesson for homework, which is all about the same angles, only in radians. Tomorrow I plan to do the same BOR activity in class. So even though only 1 kid did what he was supposed to do, it worked out ok.

Due to a minor glitch, the voicethread lesson (on introduction to the ellipse) was only available to them to view as of 8 pm last night (my permissions weren't set properly - don't know why). In today's early class, only 2/11 kids had listened to it. Interestingly, one of these kids is another notorious non-worker. Whose name also starts with J.....In the other class, the super duper keeners, 6/7 listened to it nevertheless. Wild horses couldn't keep these kids from doing their math homework.

Again, plan B for the early class, did the lesson, and offered the option of getting the work done to the ones that did listen. They chose to listen a 2nd time as well. Glory be - this J, who never, ever says one word in class, was answering and participating just great. It was like I had a new student in my class!

For the super keener class, I spent the first half of the class with all of them drawing on the eboard. Gave them each a section of the board with their initials: 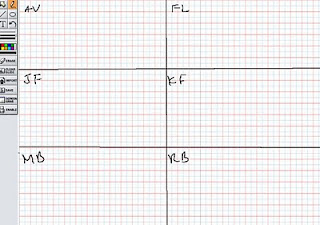 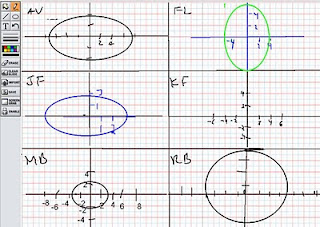 ...which led to the following discussion topics: (I shut up really well here)
Next had them do it again, draw the foci inside their own ellipse, pick any point on the ellipse, draw the focal radii, find the sum of the focal radii, etc etc, just kept on getting them to compare their own work with everyone else to see what they had in common or not. I just found that having this time to process with them, instead of just business as usual, allowed me to be more creative with my questions.

Like suddenly I thought of this: I asked them: Suppose I took a string, fixed its two ends here, and drew this ellipse: 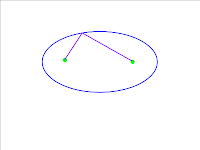 and then I took the same string, and moved its ends closer together like this: 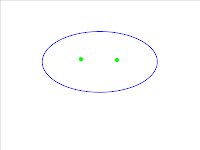 1. Will the resulting ellipse be the same or different?
2. How will it be different?

There was quite a difference of opinion about exactly how it would be different. Rich discussion, might even have someone tomorrow who actually tried it!

My impression of flipping as of now:

Pro: better class activity, feels more productive, feel more connected to them due to questions answered as needed, some kids are watching lessons twice which is what they needed in the first place
Con: feel a bit disconnected from the content in a way, takes a lot of time to do the recording - lots of retakes, tech issues at home can grind it all to a halt

I am probably not spending enough time letting them go at their own pace, though, which is a key feature of flipping. Will work on it.
Posted by Audrey McLaren at 11:51 AM