If you are one of my current students STOP READING NOW! You will ruin the surprise for this week.

Maybe I'm just flattering myself, but some students have read my stuff.....okay, now that they're gone:

I am continuing in my quest to use Ramsay Musallam's EFA in my class. I looked at last year's voicethread about operations on functions and once I was able to get a grip, for it was so very bad, I asked myself two things:

1. Which part of this can I move out of the direct instruction and into the class activity?
2. What activity would do a better job than that part did?


So this kind of thing, in which I tell the kids the questions AND the answers, is out: 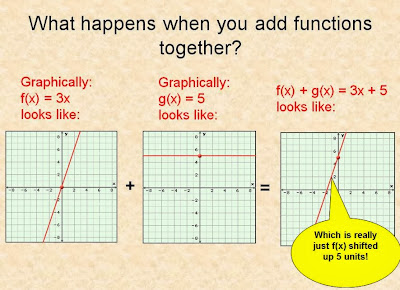 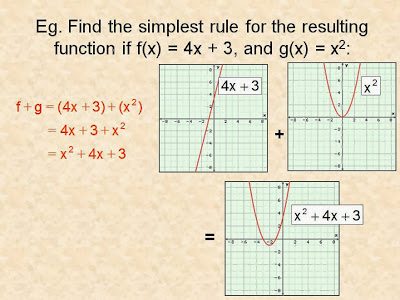 And replaced with this geogebra:....in which THEY will tell ME that the functions are being added. Notice the title of the file, gasmin of functions, gives nothing away - I used one of those 27 new trig function names instead of calling it "Adding functions". They're going to watch the coordinates of the red, blue, and green points as the vertical line moves around, and THEY'RE going to say "Oh, you're adding the y's." That simple concept, that the y's get added when functions get added, is something that almost all of my students-of-the-past have missed out on, due to the crappy way I've taught it.

Next they'll predict what sort of function the red dot is forming, after which they'll check by clicking on the checkbox called "Resulting curve". Then we'll talk about why the sum of two linear functions is also linear. Maybe we'll get into the algebra at this point, we'll see how it goes, but I'm really just looking for some number-intuition here. I hid the algebra view for a reason.

Bottom line, instead of me saying "We're going to add functions together and see what happens" this will be more like "What's happening here and why?"

Dialing up the explore:

Next, I've got a whole suite of geogebras with cryptic names to follow: tosna (subtraction), phyxyx (product), and drin (quotient). I'm sure they'll catch on and already know the next operation as we go, but at that point we can shift the focus onto the wonderful functions that you can form by doing simple operations to relatively normal run-of-the-mill functions. I'll let them play around with the functions and the operations for a bit, and I really want this to be fun for them, in the doing and in the sharing, so I'll have them share their creations to a gdoc so we can all see what sort of wonderful weirdness results. Who knows, with any luck, one of them will come up with a function we'll be studying later on this year, and we shall christen it with that kid's name. Find the domain and range of the function "Susie of x".

Dialing down the flip:

This means the original voicethread will lose about 21 slides. What's wrong with me that I thought that was a good idea?!?!?.

Most of what's left is about notation and algebra - specifically the algebraic way to do an operation on two functions, which is to do the operation on their algebraic rules. For example:

Which brings me to the next improvement I need to figure out - how to get across this important idea:

in other words, using the previous example


But I don't want to give them this kind of step-by-step, see-if-you-can-guess-the-point sort of way. I'd like it to be one of those cleverly orchestrated things in which they stumble onto it while they're doing something else....and I have to think of something before I give the voicethread to them to watch....not sure if I'll have time. Or an idea. But ideally, I want the voicethread to really be about pinning things down, but only if those things have already started to occupy their brains and annoy them.

I hope I can think of something before the day of, which is Tuesday.

Dialing up the apply:

I may give the activity from the text, which I used last year but which that group found really hard. It involves Reginald, who has investments in two companies, company A and company B. The number of shares he has in each company is given as the rules NA = 400 - 4t, NB = 1000 + 7t. There's a table to fill in, with the column headings time, NA, NB, and total number of shares.

Isn't this the most contrived, boring application ever?!?!

But at least it doesn't tell them to add, they intuitively do that, and it then invites them to find the totals both ways - first by adding the numbers in the columns, and then by using the algebraically simplified sum of the rules, to see that it comes to the same thing.

The next part uses the same story and sequence of activities to get them to multiply two functions, company A's shares (NA = 400 - 4t) by the value of those shares, which is given as v = 0.125t + 6.25. They fill in a table, get the values by multiplying the numbers in the table, then do it using algebra, and compare.

I don't know, this application just seems dumb. That's it, that's my professional assessment. But even if it's not perfect, do I need it to be perfect, or do I need it for Tuesday? I'm betting Tuesday will, once again, win out. At least there has been some improvement over last year, and I'm going to improve the one on composite functions the same way, in fact, I've already made the geogebra for that too.

As usual, please feel free to share your thoughts, good, bad, or ugly.
Posted by Audrey McLaren at 9:30 AM