A year of student blogs - Warts and all

Time to take a look at the way things evolved this year with my grade 10 & 11 math students' blogging. I have no hesitation in recommending this to anyone, because the potential for learning is HUGE. If blogging worked so well for me as a vehicle for growth, it should do the same for my students.

But it wasn't rosy for all my classes. Some kids took to it, some didn't, and in the case of one of my classes, it seemed that the entire class just didn't see the point. I do have at least 3 students, though, who now post simply because they love it, which makes me very, very happy for them.

First a look at the sequence of events, which worked out really well, even though I sort of made it up as I went along. So as not to overwhelm the kids, I gradually introduced the world of blogging. It began as assigned posts, then gradually morphed into optional use of their blog to publish their work.This sequence worked well, and the only thing I might do differently is maybe begin earlier in the school year.

Here are the milestones in brief, with more detail below: 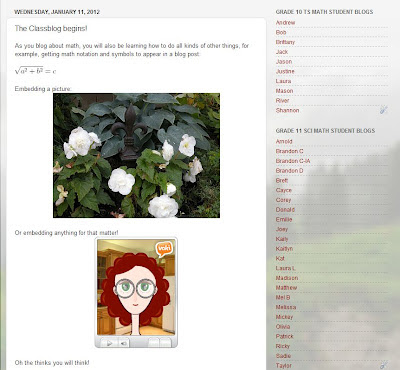 I hope this is helpful to anyone looking to get their students blogging!
Posted by Audrey McLaren at 2:40 PM